I am sensitive to the fact that it sounds like sci-fi sacrilege to ask if Gene Roddenberry is overrated. I hate to sound disrespectful or indelicate, but I am convinced it is a fair question. 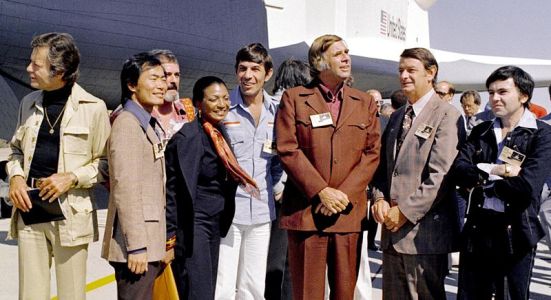 In researching the Top 10 Star Trek Voyager episodes, I stumbled across this excerpt from a StarTrek.com interview with Ron Moore:

Thane Himes notes: Your brief stint on Voyager and disagreement with how that show progressed has been pretty highly publicized around these parts. But if you had been the show runner for Voyager when you joined the show in its sixth season and hadn’t left, what are some changes you immediately think you’d have made?

Moore: Oh, that’s hard to say. I think I ran into the difficulty of what I wanted to do and what I could have done. The truth was, it was still Star Trek, and I think there were things I wanted to do with Voyager that I could never really accomplish. I couldn’t do those things until I went to Battlestar. I was talking about roughing up the ship, having the culture of the ship degenerating, having more divisions and camps within the crew. They’re out on the other side of the galaxy and away from home for a very, very long time with no real notion of when they’d get back, and I thought that would start to develop their own culture, or cultures, within the ship, that that would become a challenge to the military hierarchy of the starship. I wanted to go down some really dark roads, with the ship falling apart, the crew falling apart and at each other’s throats periodically and vying for control. The truth is I don’t know that I really could have done that at Star Trek, no matter what the political circumstances were, because the show was not designed to tell that kind of story and it really would have flown in the face of a lot of things Gene had set up and that he had said were important to him. So I think I probably had somewhat unrealistic goals of where I wanted to go (with Voyager), but then I found an opportunity to do them on Battlestar.

Bottom Line: Star Trek Voyager could have been way better than is was. The concept of Voyager was so cool! There are some good Voyager episodes, and it doesn’t deserve the disdain many Star Trek fans give it. However, there is no denying it never lived up to its potential.

The part of Ron Moore’s interview that stands out to me is when he says, “it really would have flown in the face of a lot of things Gene had set up and that he had said were important to him.”

One of the reasons Voyager was lame, is that seven years after being stranded in the heart of enemy territoy, the ship still looks all shiny and new. They still have full compliment of shuttle-craft, torpedoes, and other supplies. There is still a great deal of harmony, even with a fucking Borg living on the ship! The show just never materialized into what it was originally advertised to be.

I’m not implying that Voyager should have been as dark as BSG. It could have still been uplifting Star Trek in showing uncompromising believe in Federation ideals….But damn! Seven years into being stranded in space BFE and everything on starship Voyager was still running smooth as silk. It just seems like Voyager missed a golden opportunity for some good storytelling, but held back in the name of “things Gene set up that were important to him.”

Should the entire franchise be held back because of Gene Roddenberry?

How was Gene Roddenberry as a writer of Trek? Let’s look at his actual writing credits:

His writing credits confirms my belief that Nicholas Meyer and Leonard Nimoy are the better champions of baddass Trek than Gene Roddenberry was.

Having said all this, let me disclose that I am just a fan. I have no inside information, and certainly don’t keep up with behind the scenes writer feuds, as seem to be alluded to in the StarTrek.com posts. So I invite anyone with more knowledge of this than me to shed some light on aspects of this I’m not seeing. But from where I am sitting as I type, I do wonder if Gene Roddenberry is overrated.

Gene Roddenberry deserves much credit for Star Trek. But we shouldn’t permanently limit the franchise’s potential because of his memory. It’s time to let great men stand on the shoulders of other great men, and create a new Star Trek TV series that boldly goes where Star Trek has never gone before.

Coming Tomorrow: 10 Things I Hate About Star Trek. (Most of which Gene Roddenberry is responsible for…)

3 thoughts on “Is Gene Roddenberry Overrated?”

Join 343 other followers
A Northern Observer